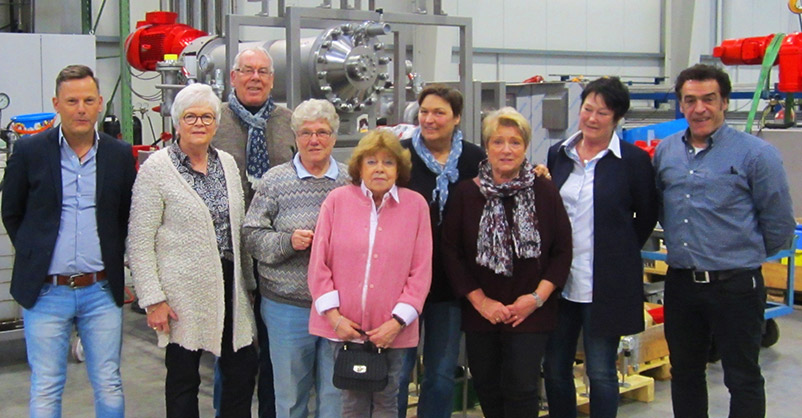 Following a long tradition, a joint meeting of pensioners and former colleagues from Schröder Lübeck took place after so many years.

The idea came from the RONO employees who warmly greeted there former colleagues and proudly presented the new premises of RONO Maschinenbau.

The new generation of RONO’s scrape surface heat exchanger was examined with great interest by Erich Schleicher (former technical director at Schröder) who wanted to know all details of the developments. Doris Quensel as a former << Unilever Key Account Manager >> was very pleased about the business contacts between RONO and Unilever and the current orders received from this global food producer.

Eva von Holdt and Gerda Hahn were very impressed by the size of the assembly hall and the very modern production facility at RONO. „My deceased husband Lutz Hahn (shareholder of the former company Schröder) would be proud to see that the Lübeck machine-building tradition continues with RONO and that so many former colleagues are back to a new team at RONO, „says Gerda Hahn. „Even his partner Peter von Holdt would have great pleasure in this state-of-the-art technology“, Eva von Holdt is sure of that.

This afternoon was a joyful and funny reunion for all participants and should be repeated in any case … That’s for sure and agreed by all << RONO – Schröder colleagues >>. We will organizing this meeting again next year says Lars Zühlke, Klaus Peter Röttger, Sven Becker, Frank Müller, Tina Grassnick, Michael Billowie, Dietmar Wilkens, Wilhelm Melchers, as well as all the others.

Left Picture: The reunion with coffee and cake was so much appreciated and of course guided with stories from the good old days at << Schröder >>